skip to main | skip to sidebar

And so the sun dawned on the second day of our southern sojourn. We planned to leave early to drive to Munnar, a lovely hill station famous for its tea gardens. Departure time was pegged at 8 AM sharp. So, of course, we left at 10 AM. We had to. It was Vix's fault. Whenever we ran late on the trip, it was always Vix's fault, even when it wasn't.

There had been some drama the night before. Charles, our cheerful and good-natured driver seemed slightly pissé, because he'd wanted to leave early. The last bus home for him left at 8:30 PM, the time that we'd started our revelry in XL Bar. The ride back to the hotel left my knuckles white. Neo, Henry and Rocky were up in front with me and they looked somewhat fearful too. The others in the back had not the slightest idea that we were rushing through lanes 10 feet wide at speeds approaching those of a bullet. Speaking in Marathi, as foreign to Charles as Gaelic, we decided that we should probably give him some money so that he could take a rickshaw home. That had solved the problem.

The drive to Munnar was approximately 5 hours of road coiled around hills upto 1800 metres tall. Our trip was punctuated by two stops, although we wanted to take many more. The first of these was at a large waterfall by the roadside; it was large enough that there was a small bridge over it. 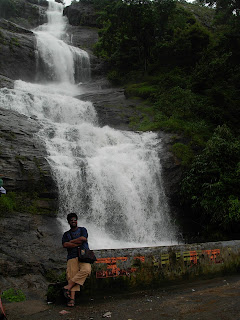 As always happens with such places, stalls selling food and drink sprouted up around it. We discovered that bhutta in Kerala really isn't that good; at least it wasn't at that place. The corn grains were really dry.

Photography was easy too, because of the spectacular views that the hills of Munnar provide. 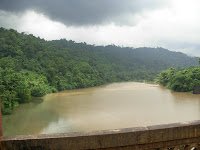 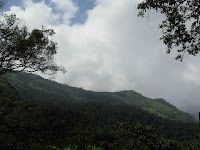 Our second stop was at another such location. Spirits were high; we'd stocked up in the town before we hit the hills, having been warned by the ever-reliable Charles that venturing out at night in Munnar for anything would be dangerous due to fog. The liquor store itself offered us more talking points. It was the most unusual one we'd ever seen. It was slighly less well-fortified than the average Middle Ages castle. And the cheapness of the liquor (all of it, even the good stuff) would gladden the hearts of all but the most devoutly temperate.

Although we were running late (because of Vix obviously), we stopped for a few more pictures of the astounding views that we saw. Greenery as far as the eye could see, rolling hills blanketed with forests and tea plantations. 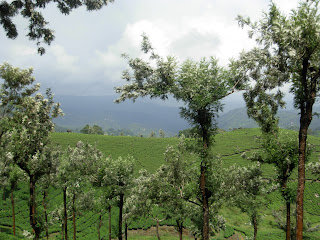 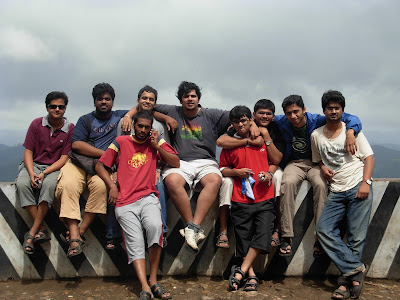 We arrived at our quarters in Munnar, the Igloo Lodge (and ayurvedic resort) at approximately 3 in the afternoon, three hours late. All our afternoon and evening sightseeing plans were effectively wiped out. We had been booked into dormitory accomodation here, unlike anywhere else. The dorm, meant for about 20 people, held only half that number. One bunk bed for each person! The hotel building looked new and freshly painted, the grounds and lawns were nicely groomed and well-maintained. There were fruit trees and flowers, shrubbery and climbing creepers of all manner. 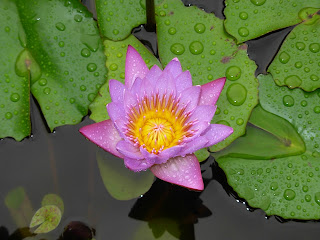 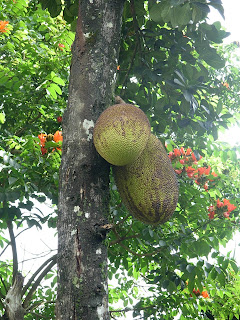 Having arrived too late to go into town for lunch, we decide to revictual at the hotel's own restuaurant. It would go on to be one of the most tragic mistakes of the trip.

With no dishes from the restaurant's lunch menu available (since it was 3:30 PM), we had to content ourselves with snacks; sandwiches and other similar fare. It's difficult for anyone to make a meal of the average sandwich in a restaurant. You can just about finish one in four bites. With it being three hours past when we should actually have had lunch, and with people like Henry (whose exploits at the dinner table are as infamous as his feats on the football pitch are renowned) among the hungry, the scene was set for a long afternoon. 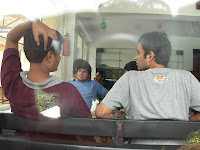 It didn't help that the restaurant was laughably understaffed. I could almost imagine the guy who took our order going into the kitchen, donning a chef's hat and apron and chopping veggies. In any case, a lunch consisting of about 25 sandwiches and 4 plates of fries took us about 3 hours to order, have served, and eat. So we took some more pictures.

By the time we'd finished, all hopes of a small evening excursion into town had vanished. So we played football, 3-on-3. With Henry and Horus on my team, we could not fail to win. Horus later got a knock on the head as a result of falling (some would say pushed by Henry) onto the brick border of the garden. On the plus side, Horus made the new Rowdies artwork before it happened.


We had the foresight of ordering our dinner two hours before we were hungry, and it turned out to be quite good. 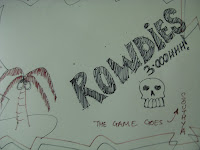 After dinner, there was the big event. The first Rowdies vote-out. The vote-out itself was conducted in a quite normal manner. The events after it were something else entirely.

First, Jay-Z, the host, forgot who had gotten how many votes. While we laughed and jeered (quite good-naturedly), he frantically played back the video to jog his memory. Then, when it seemed as though Ruud was going to go out, having garnered four votes, he introduced a twist. "Lekin ye Rowdies hain. Is mein twist hote hain." Ruud was immune, it would be Henry, Neo and Amul to play off in a game of Call, to decide who went out. It turned out to be rava laddoos-are-like-cigarettes Amul. Jay-Z was subjected to plenty more ribbing.

Then it was time to drink. The two bottles of beer we'd bought were finished quickly, but no one was showing any appetite for the hard stuff. People were already falling ill, victims to the cold and damp of Munnar.
Posted by Jayraj Jog at 8:14 AM