skip to main | skip to sidebar

Morning in Munnar on the third of our seven days in God's Own Country. There was sickness everywhere. Although Kerala is outstandingly beautiful in the monsoon, made more so by the conspicuous lack of tourists, the cold, wet climate breeds many diseases. And so it happened here as well.

Rocky earned himself the nickname Pressure-Boy, for obvious reasons, though even I was similarly afflicted. Neo was running a slight fever, as was Amul. 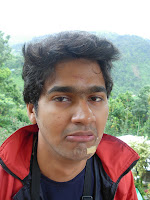 And of course, Horus had hit his head the previous evening. In addition, we were fast running out of dry clothing. We'd given most of it up to the hotel laundry and now they were working frantically to get it dry by the following morning, when we left. The hotel's game room had our clothes spread out on all the horizontal surfaces, fans running.

All wasn't doom and gloom though. We had beautiful Munnar before us. Setting out at approximately 10 PM (late again, due to you know who, this time, for real), we made our way firstly to Matupetty (or Madupetty or other variants) Dam. 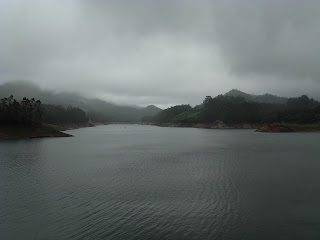 The weather was dull and grey, drizzling intermittently, and it was quite cold as well, considering we were near the tropics. It felt like how all non-English footballers describe Manchester as being. So we loved it.

At Matupetty, the first task of Rowdies 3.0000hhh awaited. It consisted of shooting balloons with an air rifle, like those games you have at carnivals. Everyone got one shot each, and the ones who burst their balloon would be immune from being sent out of the game. 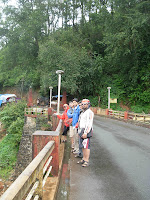 Alas, Jay-Z badly miscalculated. With no prizes on offer at the shooting stall, the stall owner had inflated the balloons quite generously, and the cloth backing was also quite tight; these are the main reasons it's difficult to burst balloons in carnivals. Everyone, except myself and Neo, got theirs on the first shot. We'd gotten the worse of the two rifles that the owner had. So there was a very, very, very long, instant-death shootout between us. To everyone else's envy, we got about 7 shots each, before Neo rather unfortunately missed the last balloon on the sheet. He was out and I had avoided elimination by a whisker.

Echo Point was nearby, and we drove over. We thought, at first, that it was a fake, because we couldn't hear any echoes. Turned out, we hadn't been shouting loud enough. This was a pretty busy tourist spot as well, just like the dam, and consequently there were plenty of vehicles around. 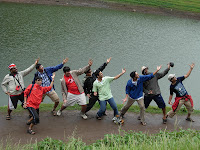 One among us (I don't remember who, but it's just convenient to say Vix), rather hilariously got into someone else's Tempo Traveller, that looked just like ours. We took more pictures too. Taking inspiration from the billboard we'd seen on arrival in Kochi, we took the photo that's displayed alongside. The fellow tourist who clicked it for us just about held off paroxysms of laughter. Note Rocky's tragic lack of coordination between torso and legs. Also, Vix thinking that he's SRK.

Munnar is famous as a tea-town. There are three world-famous varieties of Indian tea: Assam, Darjeeling and Nilgiri. Of these, Nilgiri comes from the hill-station of Munnar, in addition to southern Kerala and the Nilgiri district in Tamil Nadu. When Ruud and I had last visited Munnar, eight years ago on a family trip, the tea plantations were owned by the Tatas. But in 2005, they decided to get out of the plantation business and sold out to the plantation workers themselves. Plantation workers now own 69% of stock in what is known as the Kannan Devan Hills Plantation Company (KDHPC), an experiment that is quite unique.

I got all this information from Munnar's excellent tea museum, which was where we went, after Echo Point. 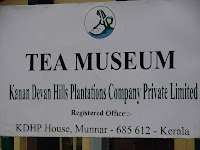 The tea musuem has a half-hour film on the history of tea in Munnar. It also has one of the few operational tea factories in India that is open to tourists. A wrinkled guide explained the entire process of converting green leaves into black powder. 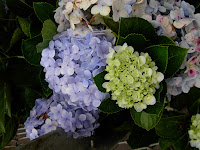 I was quite surprised to find out that green tea is made from the same leaves as black tea. The tour ended at a museum gift shop featuring (what else?) tea. There was also a free cuppa for everyone. The museum grounds also had a pretty little garden with plenty of flowers. Horus took a camera and went crazy.

Lunchtime. Rather, way past lunchtime. Everyone was hungry and it was almost three before we got into town and found a good restaurant. While the others started, Ruud, Jay-Z and I went to a store to do something that we'd all decided. We bought lungis for everyone, haggling and going from store to store, looking for the best deal.

The restaurant was excellent. We ordered Keralan meals (which means a thali in Kerala). A banana leaf was set in front of each of us. A middle-aged man with an avuncular air about him gave orders to his crew of waiters. 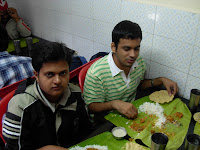 They set about the job of popping our pants buttons, such was the quantity of food served. It was all vegetarian, all delicious, all rice and all too much for me. Endless bowls of delicious payasam followed the meal. And the best part? The bill. Lunch for ten people (Charles ate with us) cost us Rs 250.

After lunch, we could hardly walk. Nevertheless, we bought a couple of music CDs to listen to in the bus. We wanted to hear the Tamil song Aapdi Pode, made so popular by Abhishek Bachchan in a recent ad for a mobile phone. There was one more place still to go to; Eravikulam National Park, located 13 km from Munnar. We arrived there at 4:30 PM and were told that the park closed at 5:30 PM. Cursing Vix once again, we bought tickets and went up in the park bus (private vehicles aren't allowed up into the park).

Eravikulam National Park is one of the last habitats of the Nilgiri Thar, a species of ibex. It is closely related to sheep and is an endangered species; its world population is no more than 2500. The drive up to the park's entrance was thrilling too. 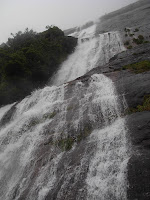 It had gotten even cloudier and the park's pristineness was something to be cherished. The highlight of the drive was a spectacular waterfall, at least a 100 feet high. Indeed, it was so high up that the clouds covered the cliff from which it was falling, giving the impression that it was falling from the sky itself.

Because the park closed at 5:30, we didn't get to walk too far into it. At 5:15, park officials caught up with us and asked us quite politely to get our asses out of the park. 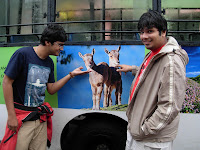 Quite dejected at not seeing a Nilgiri Thar, we went back down to the parking lot by bus. There, Ruud and Horus found the next best thing to a Thar.

On our way back to the hotel, we had an encounter with a couple of scary-looking wild dogs that were guarding the entrance to a village on the banks of a river that were absolutely dying to get a look at. We also tore/dirtied our clothes trying to get over the barbed wire into one of the tea plantations to get a few photos. Back at the hotel, it was dinner time and then a few games of Call. 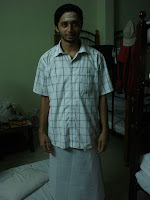 Everyone tried on their new lungis and Vix smeared talcum powder on everyone's foreheads, to mimic vibhuti. Almost inevitably, his new nickname was vibhuti-boy. Then, we finally flung our exhausted bodies onto our beds. Neo was running a worryingly high temperature.
Posted by Jayraj Jog at 1:46 AM